How to change objects

This recipe helps you find the best approach for mutating object state in a Rails app. It covers the whole pipeline from the view, through the controller all the way to the model.

Rails has some awesome magic that allows us to build apps very quickly. The Rails Way is very useful during the initial stages of development, and for simple use cases. However for more complex scenarios, I prefer to use Object Oriented best practices like Service Objects.

The flow chart below helps you choose the best approach for mutating object state by looking at two criteria: 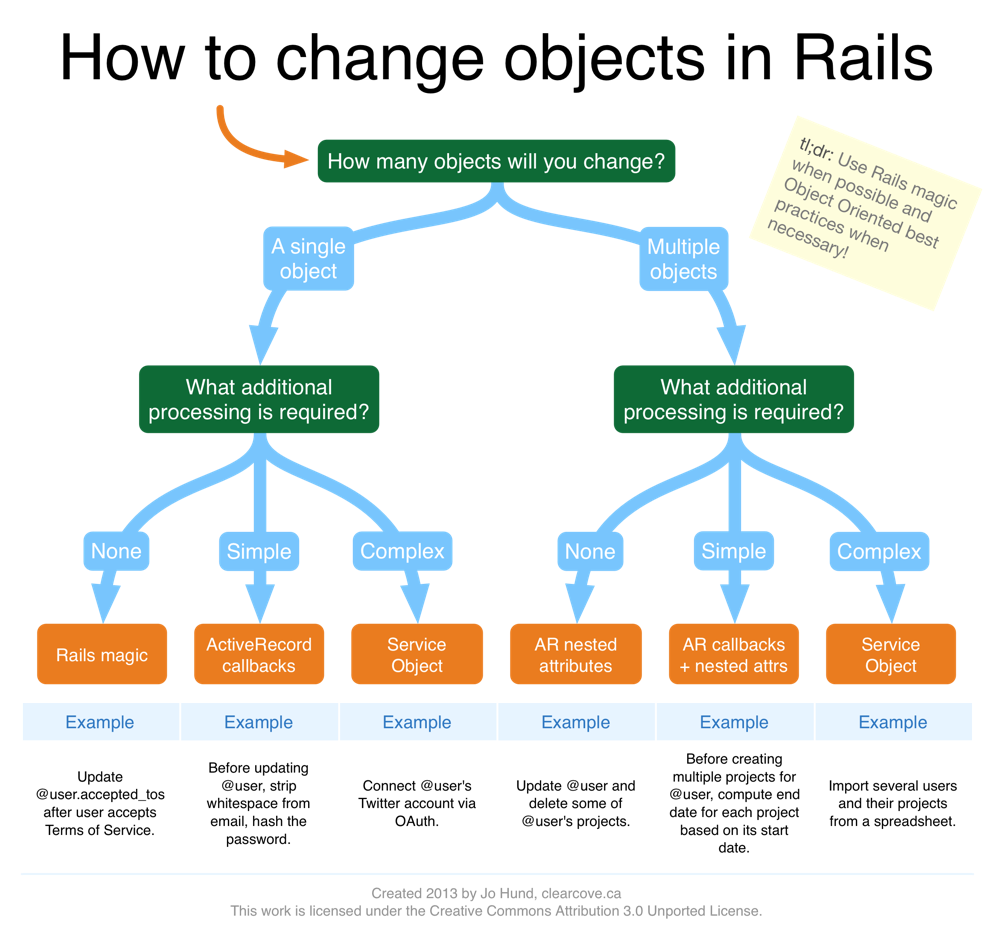 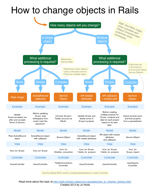 How many objects will you change?

Are you working with input data for a single object, or for multiple ones? This criterion helps you decide whether to use regular resource forms, or nested forms.

NOTE: We don’t look at how many objects will eventually be affected; that will be dealt with under additional processing.

Attributes for a single object are given.

Attributes for multiple objects are given. E.g., changing a user and some of the user’s projects with a single form submission.

What additional processing is required?

This question is concerned with the complexity of the change. E.g., what else needs to be done as a consequence of this change? What other resources are involved?

All we do is change the attribute and nothing else.

We do some very simple processing around the change. E.g., we sanitize some data or compute some dependent values. ActiveRecord callbacks are suitable in this scenario, as long as they reference only internal state and no other objects.

Involves one or more of the following:

Use the vanilla Rails Way:

Use the vanilla Rails way with ActiveRecord callbacks.

Callbacks should use internal state only. There should be NO references (read or write) to external objects or services.

Read this blog post for more information: The Problem with Rails Callbacks

Update @user and delete some of @user’s projects.

Use the vanilla Rails way with nested attributes:

Import several users and their projects from a spreadsheet.

Create a Service Object for importing users and use it for the form and controller. Please see 7 Patterns to Refactor Fat ActiveRecord Models for more information on how to use Service Objects.